END_OF_DOCUMENT_TOKEN_TO_BE_REPLACED

Scientifically, Sermorelin is growth hormone releasing factor 1–29 NH2-acetate.  It is actually a peptide with the first 29 amino acids of growth hormone.   This is why Sermorelin causes growth hormone to be secreted from the pituitary gland and is called a secretogue (similar to HCG and testosterone).  For this reason, Sermorelin is considered a stimulator of HGH and while not as powerful as supplementing extra growth hormone it is a healthier alternative than HGH since it encourages natural and healthy pituitary function.

HGH is a Class 3 controlled substance and is required to be used by children with human growth hormone deficiency or Adults with Adult Growth Hormone Deficiency.  It is also a popular treatment for HIV patients. 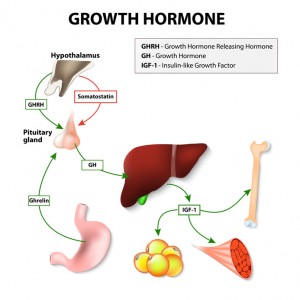 Sermorelin is not a controlled substance but still a pharmaceutical requiring a physicians prescription.  It is often prescribed with growth hormone releasing peptides like GHRP-2 and GHRP-6.  hGH also is incredibly expensive and typically costs more than $1,000 per month.  Sermorelin is less than half the price of HGH.

Sermorelin action to encourage pituitary gland activity is increasingly being prescribed to assist with TMI (Traumatic brain Injury) and brain health.   See our blog on this topic: Sermorelin and Brain Health

Let’s look at the issues caused by a decline in hGH decline and how hGH improvement effects those symptoms (Here’s an article on the benefits of HGH):

Low amounts of hGH typically sees a decrease in lean body mass (muscle) and an increase in fat mass. Correcting hGH levels has been shown to improve muscle mass and reducing fat.

Sermorelin and improved hGH corrects body composition and improves muscle mass and strength. Best results are after 12 months of therapy.

By improving bone mineral density and increasing muscle mass and strength, one can prevent joint deterioration that is a feature of arthritis. Optimal growth hormone levels are also essential for connective tissue in joints.

Exercise performance is reduced due bone density and muscle mass issues but also due to a reduction in oxygen uptake.

There is greater heart disease risk in individuals with growth hormone deficiency due to a greater premature atherosclerosis risk (plaque inside the arteries increasing risk of heart attack and stroke).

Although adults with growth hormone deficiency are not normally considered to have a compromised immune system, there is some evidence to suggest that hGH therapy can help regulate immune function.

Reduced psychological well-being has been reported in individuals with growth hormone deficiency.  Sermorelin has resulted in improvements in mood, energy and general feelings of well-being.

Hormone Therapeutics is the leading national company assisting men who want to get their lives back through Hormone Replacement and Testosterone Replacement therapy. Our local physicians are ready to treat you anywhere in the entire country.  Hormone Therapeutics is pioneering an easier, cost efficient and more private way for you to work with our clinical advisors and physicians from the privacy of your home or office after your local physical exam confirms you have one of the symptoms of Low T.  Wherever you live!